Your session is about to expire. Do you want to continue?

Your session has expired and you have been signed out. You will be redirected to the homepage.

Beaches and tides and lovely lighthouses!

Experience true maritime warmth and hospitality as you tour New Brunswick, Nova Scotia and Prince Edward Island on this seven-day tour. Visit all the highlights, the warm hospitality of Moncton, the stunning nature at Hopewell Rocks and urban charm in Halifax. In beautiful Brackley Beach, enjoy a day of sandy beaches and majestic dunes. You won’t forget the charming towns and delicious seafood that you encounter along the way.

If you love the freedom and adventure of the open road, then a Fly & Drive vacation is just what you need. Fly into Moncton and drive your way through the experience of discovering parts of Canada one kilometer at a time. The car rental and hotel stays are included in the package, along with a bunch of other travel essentials that will help make this trip easy, fun, and unforgettable.

Located in the southeastern part of the province, in the heart of the Maritime provinces, Moncton is a dynamic and culturally effervescent city. Only 20 minutes from Shediac or 45 minutes from Hopewell Rocks, it offers many restaurants and festivals that make the city vibrate. The Petitcodiac River, also known as the Chocolate River, allows you to observe the famous mini tidal wave that occurs twice a day. In Dieppe, most of the population is francophone, because of the presence of the Acadians. Don’t forget to visit the market to taste local products! 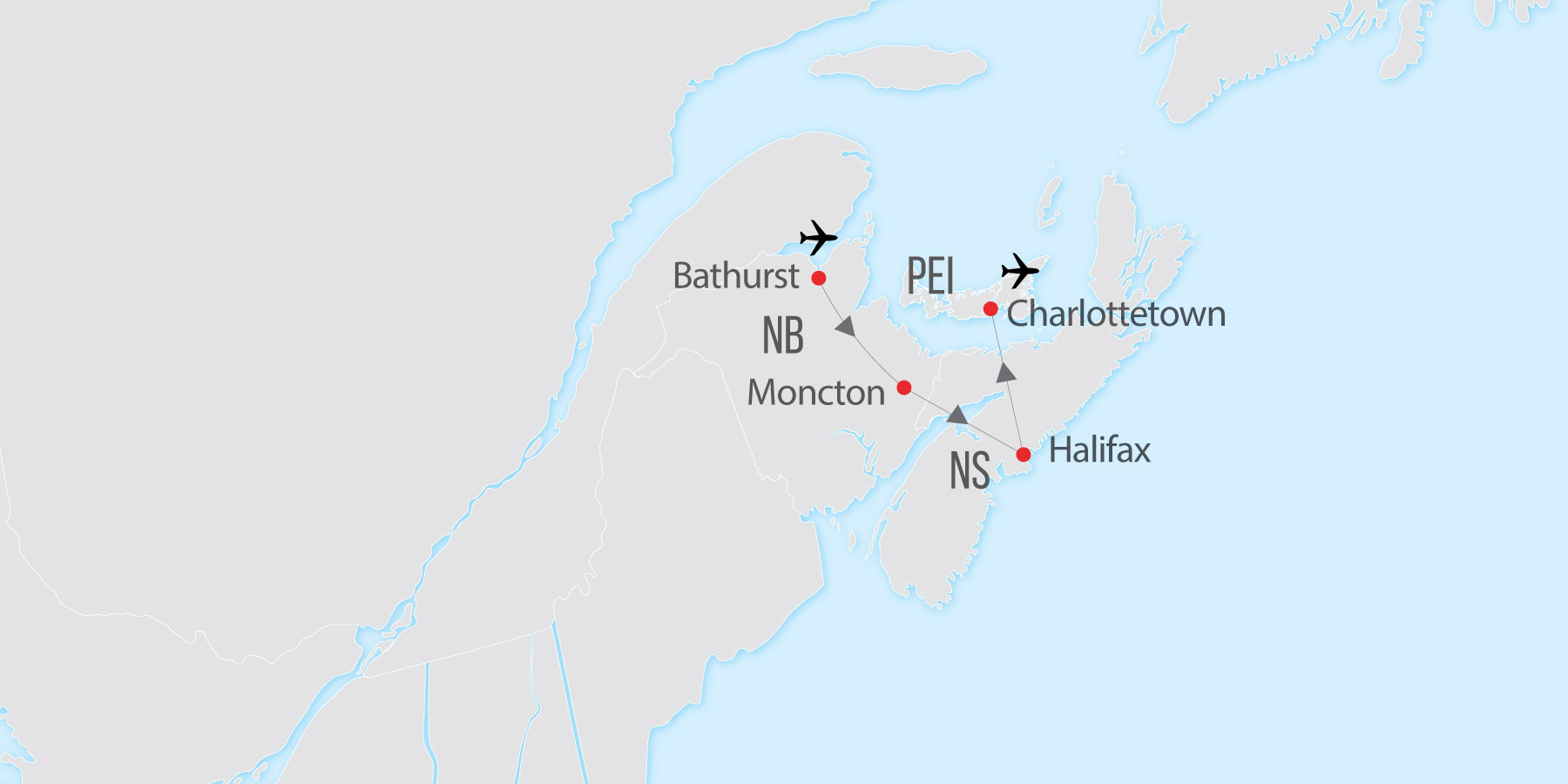 Located 40 minutes from Moncton, the Hopewell Rocks are a must-see for the highest tides in the world. These rock formations are unique and create an amazing geological environment. Here, tides rise to more than 14 metres (equivalent to a 4-storey building) in less than 6 hours. Naturalist guides welcome you to introduce you to the phenomenon and an interpretation centre explains the tides, fauna and flora encountered on the site. You can follow paths to the edge of the cliffs and admire the breathtaking panoramas and the bay.

Afterwards, take the Fundy Trail Parkway, a 30 kilometre-long road. This is the perfect way to experience the spectacular coastline of the Bay of Fundy. Vehicles travelling on the highway  pass by pristine beaches, waterfalls tumbling from ancient cliffs and shorelines carved by the highest tides in the world for thousands of years. Don’t forget your camera and expect to stop often to admire the magnificent views at the numerous lookouts along the road. Stop at the Big Salmon River Interpretation Centre and take the opportunity to cross the pedestrian suspension bridge that stretches over the clear waters of the Big Salmon River.

Arrive in Saint John! Located at the mouth of the Saint John River, this large industrial port is worth a visit with its red brick buildings and imposing warehouses. Surrounded by hills, the city of Saint John boasts a certain mystery and is often covered with a thick fog. Stroll along the wharf where there are lively restaurants, and don’t miss a visit to the oldest public market still in operation in Canada.

Not far from the city centre, the Reversible Falls simply amazes with its succession of impressive rapids at low tide when the river rushes into the bay. The phenomenon will surprise you, not only visually, but the sound of swirls is deafening! Here, you can observe the Reversible Falls as you advance on a glass and steel platform. This new attraction allows you to have a view overlooking the falls in total safety.

Embark on a whale-watching cruise in the Bay of Fundy ($), an incomparable place to admire the famous marine mammals that gather here between June and October. Admire whales, seals, bald eagles, and even lighthouses (like the Campobello lighthouse) aboard a zodiac if you’re an adrenaline lover, or in smoother fashion,  aboard a sailboat gliding in the wind!

A charming village on the edge of the Bay of Fundy, St Andrews-by-the-Sea was for once a popular resort for wealthy families. You can admire the beautiful houses, which reflect a different era, and discover the restaurants, coffee shops and art galleries on the main street. It is also your gateway to whale-watching cruises in the bay.

Travel to Nova Scotia aboard the over two-hour Bay Ferries Fundy Rose ferry. Don’t forget to book your crossing as soon as possible. It can be very busy in high season with only one crossing per day!

Facing the bay, Digby is a scallop capital and is your gateway for taking the ferry to New Brunswick.

If you haven’t had a chance to go on a whale-watching cruise in the St. Andrews area on the New Brunswick side, there’s still time because there are also several cruises available in the Digby area. Nearby is also Port Royal National Historic Site, home to a replica of the Habitation, where, in 1605, Samuel de Champlain participated in one of the first attempts at a European settlement in North America on traditional Mi'kmaq lands. Costumed guide-animators will tell you all about the complex history of this colony.

Drive to Halifax via the Annapolis Valley. This region is famous for its vineyards. Wines such as the AOP Acadie Blanc and Tidal Bay have won awards and will not fail to surprise you. Towards Annapolis Royal, a pretty town with Victorian houses, you can stroll along the river. Annapolis Royal, the former capital of the province, was once the capital of French Acadia under the name of Port Royal. You are here in historic Acadian lands, where the first European settlers arrived. Follow the coast to Cape Split and admire a beautiful view of the Bay of Fundy. This provincial park facing the bay offers beautiful seaside walks. Another national historic site is on your way: Grand Pré is a UNESCO World Heritage Site, commemorating the Great Upheaval of 1755 and the deportation of more than 10,000 Acadians. The visit is moving and pays tribute to the Acadians, a must during a trip to Nova Scotia! Check-in at your downtown Halifax hotel for 2 nights.

Today, discover the city and the coastal region! You will find lighthouses, fishing villages and charming little shops. It is an important tourist destination for its marine panoramas, rocky landscapes and lighthouses. It was also off Peggy’s Cove that Flight 111 Swissair crashed on September 2, 1998, and there is a memorial near the village. Check out a gallery dedicated to the works of sculptor and painter William E. deGarthe, who painted scenes of people and local life in Peggy’s Cove. We also suggest a stop at Lunenburg, a small port town with unique architecture. The historic centre was placed on the World Heritage List by UNESCO in 1995. This ensures the protection of Lunenburg’s unique architecture, both private and public, as the best example of a planned British colonial-style community in North America. Return to Halifax for the night.

Crossing the Confederation Bridge, this 12.9-kilometre arched bridge is the longest bridge in the world that overlooks ice-bound waters. Years after its construction, it remains one of the greatest Canadian technical achievements of the 20th century. Arrive in Charlottetown and take the opportunity to stroll through the heart of the city and discover the shops and restaurants of Victoria Row. Check in at your hotel.

Day trip to Brackley Beach and Prince Edward Island National Park. You will be charmed by the miles of sandy beaches and majestic dunes. You can also enjoy several attractions close to the beach. If you are interested in Anne of Green Gables, several sites on the island will make you discover more.

Return to Moncton for your flight home.

The hotels listed below are presented as examples for your reference only. Where “or similar” is indicated, guests will stay at a hotel of the same star rating. The hotel accommodations will be communicated to the consumer or travel agent prior to departure.

Unless otherwise indicated, guests will stay in a Standard Room at all hotels during the Fly & Drive trip. Occupancy: Maximum of 4 persons (4 adults or 2 adults + 2 children up to 16 years old)

Exclusions: Fuel, Personal Accident Insurance Plus (PAI Plus) & Personal Effects Protection (PEP), Other optional services such as refueling charges, applicable one-way service fees, baby seats, ski racks, etc.,       Extra Additional Drivers (third person & above): $10 per driver per day up to a maximum of $50 per driver per rental plus applicable taxes/fees - payable at rental counter; Anything not specifically noted above.

Minimum age for car rental is 21 with a prepaid voucher. A valid driver's license from country of origin must be presented at time of rental. All drivers under the age of 25 will be subject to a surcharge of CA$25.00 per day, subject to change. Certain car classes may not be available to drivers under age 25

We're looking for the best packages for you.

We're looking for the best flight+hotel for you.

We're looking for the best hotels for you.

Prices take into account taxes and are rounded to the nearest full dollar. Full details on taxes and fees are on the booking page.

We're looking for the best hotels for you.

We're looking up your booking history.